Born in Eastern Tibet in 1914, with the age of 19 years Gyumey Kensur Geshe Ogyen Tseten (also spelt Ugyen) left lay life in order to pursue the study and practice of Buddhism 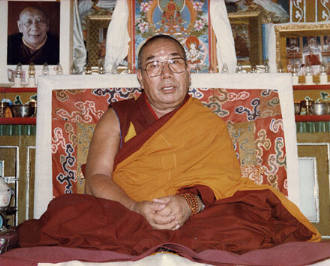 as a monk in Sera Monastery - one of the great monastic universities of Tibet. He studied and practised there for almost forty years becoming a Geshe of highest calibre, and then entered the Gyumey Tantric College to complement his general Buddhist training with the specialised study of tantra. Over this time he devoted himself to many great teachers and received numerous instruction and practice lineages. With the communist Chinese clampdown in Tibet in 1959, he escaped to northern India where he spent many years teaching the monastery monks and others.

In 1967 the Dalai Lama asked him to go to Switzerland to set up a new monastery/temple for the Tibetan refugee community living there. He built that in Rikon and lived there as abbot of the monastery giving many teachings to the Tibetans until 1974. That year he was asked by the Dalai Lama to become abbot of the Gyumey Tantric College, which required first becoming 'acting abbot' for three years. Under his care the Tantric College in exile blossomed into an institution of great learning and practice again. Then after being abbot for a year he asked to be excused to undertake a long retreat. With the Dalai Lama's blessing he returned to Switzerland where he completed the 'great retreat' including the preliminary practices over a period of five years. The concluding activities he did in Sera Monastery in South India.

Starting with a Buddhist centre in Hamburg, Germany he then began to visit many Buddhist Centres for westerners in Europe and Australasia giving numerous teachings and initiations. At the request of the monks in Sera Je Monastery in South India, he returned again to India and has been teaching the monks there since, while occasionally visiting other countries to give teachings, initiations, transmissions and ordinations to westerners and Tibetans. Among his students are most of the senior geshes and tulkus of Sera Monastery, as well as thousands of geshes and younger monks and lay people all over the world.many teachings, initiations, transmissions and ordinations.

He spent most of his days from early morning in meditational practice and greeted all with love and kindness, and untiringly and without any bias giving care and advice to whoever is in need. Until 2002 he was based mainly in Sera Monastery from November to March and in Europe from April to October. After that he remained in Sera Monastery, and did not travel out of India again. 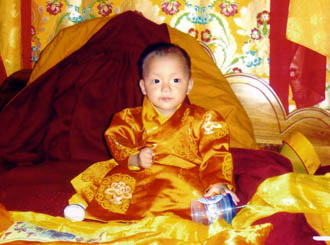 At 4:30 in the afternoon (local time) on October 11, 2007, having finished his activites for this life, he passed away while with close disciples and attendants in Sera Monastery. His mind remained in his body in deep meditation for another 8 days after which his body was cremated in the traditional manner at Trehor Kangtsen of Seraje Monastery in South India, in the presence of thousands of monks of the monastery.

This year, 2009, His Holiness the 14th Dalai Lama has officially recognized the "Yangsi Rinpoche" or reincarnation of Gyumey Kensur Geshe Ogyen Tseten in the 7 month child from Mainpat in central India, Tenzin Ogyen Chonyid. For some photos see Yangsi Rinpoche page.

For contact information, write to his manager Jampa Rabten, or to his former secretary-attendant Sönam Tenzin.